In reviewing the past year, I realize I’ve frittered away too much time looking at boring, useless PowerPoint presentations. I’ll never get those hours back. 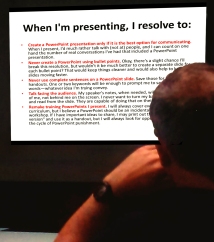 A presenter and an audience should have real, authentic conversations. Such conversations almost never involve a PowerPoint presentation.

PowerPoint presentations might be helpful when someone is sharing graphs, pictures or other visual content. Too often, though, PowerPoint slides are overcrowded with text that stifle communications, especially when the presenter reads aloud—word-for-word—the endless prose projected onto the screen.

I believe fewer PowerPoints would make this world a better place in which to live, to learn and to work. Do you agree?

Towards that end, I hereby resolve that during the coming New Year I will become a better communicator by minimizing or even eliminating the boring PowerPoints that threaten to clutter my life. Are you with me? Will you join me in this important revolution? Here’s what I commit to do.

When I’m presenting, I resolve to:

When I’m in the audience, I resolve to:

I’ll close my rant with a quote from Seth Godin. In a list of rules for PowerPoint, he leads with this:

No more than six words on a slide. EVER. There is no presentation so complex that this rule needs to be broken.

This entry was posted on Wednesday, January 1st, 2014 at 9:00 am and is filed under Life in General, Marketing & Strategy, Marketing in a Nonprofit, Marketing Success. You can follow any responses to this entry through the RSS 2.0 feed. You can leave a response, or trackback from your own site.